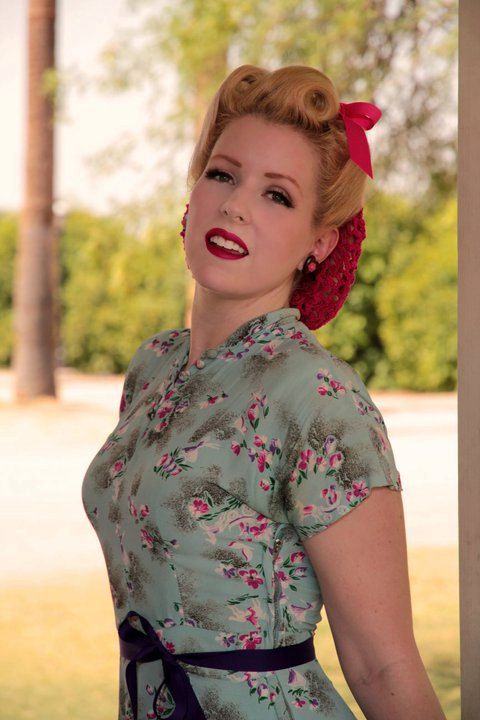 It is no secret that Harpie Lyn never liked snoods. Nothing screams ‘bombshell’ to me quite like an alternative-fabric hair net. Can you taste the sarcasm yet? In every effort to stay classy, I was very dismissive toward the idea of a hair snood. This month, it was time to challenge my own predetermined assumptions of the dreaded snood. “Snood”…What an odd word. It sticks to my tongue like a rogue piece of yarn in a frenzy of knitting.

The first stage of snoodwearing was denial. This isn’t a hairpiece. It’s not an accessory. It’s just a beanie worn awkwardly at some sophisticated angle. I refused it. The second stage was experimentation. If it’s knit by me, it can be taken apart by me if it’s dreadful. Maybe that’s a fair trade. So there’s a resolution if I wore the snood and thought it was the worst thing since Herbert Hoover’s economy. I ended up knitting a generic snood of snuggly brown yarn. The third stage of snood was knitting it and dumbfoundedly becoming attached to it.

I started wearing my snood around the house in an attempt to build some sense of confidence in my latest mushroom-esque addition. Eventually I realized that even while banging away at my keyboard (completely sedentary activity, mind you), the stupid thing would slip off my tiny head. Flustered, I tried stringing it with an elastic piece. It looked even worse. Giving up, I resorted to those little snap-clips that every little girl uses to keep her bangs out of her eyes. With one on each side by my ears, the snood finally stayed put. Then I realized that the reason a snood wasn’t prudent for me all this time was because it isn’t a simple garment, despite its appearance. Topvintage.net (which has quickly become one of my favorite sites on the internet) had several illustrations of snoods and how to wear them- 100% of the time, the models had their hair rolled and done up. Here lies my problem. So I began rolling my hair before wearing the snood using a hair tie and one oversized bobby pin that matched the color of my [natural] hair. I wore it out the first time to run errands (what a conservative lady stereotype) and got no feedback, which I interpreted as a good thing. So I wore it again. In the brittle misery of this particularly frigid winter, my little snood experiment did well to fit into my own style and appeal to women who don’t want to wear hats but also don’t want to have a bare noggin to the temperatures.

Let’s talk history: Recollections Blog (another excellent new resource) posted this snapshot of snoods emerging in the Middle Ages: Click Here. In the earlier part of the 20th century, snoods seemed to re-emerge as a means of function before style, and shortly becoming a staple of both. WeHeartVintage.co also illustrated excellently what different forms the modernized snood took. Click Here.

The snood, in many ways, shapes up to be something between a fascinator piece and a hat; one that is perfect for both indoors and outside in the cooler-but-not-frozen months. Aesthetically, once the positioning of the -er- headpiece is correct, the snood is rather complimentary. Particularly with a warm coat or sweater, the snood adds a certain 1930s-40s vintage look to any woman’s apparel. Despite my previous mentions of the nonsensical nogginwear, I must admit that through experimenting, my mind has been changed (if only for the season) about snoods.