We at RRBlog and our incredible allies in Operation ORCHID want to take a moment to express that we aren’t a hostile group. In the past, we have been called names such as muckrakers, the opposition, instigators, aggressors, and even ‘precocious, misappropriated broads’. That last one is Harpie’s favorite. Despite the curious rumors and false accusations, we are always prepared to give credit where it is due, even if we don’t like the view of a person or group receiving credit.

Today actually yielded a pleasant surprise. After a two-mile stretch on bicycles, we decided to take an overdue wander on the northern end of the Duke’s Estate property which is known best as the site where the mansion stood. The ‘arboretum’ is its formal name, although for some reason the foundation never held any official opening to the area. Its as if they didn’t have an overwhelming sense of pride- rather they carried a guilt or shame associated with the demolition and subsequent display of the now-emptied landscape. It was always evident something was missing… until another someone was lost.

The final manager of logistics at Duke’s Estate was known affectionately as Cupie. Her role in the Duke Legacy can’t be understated. Since her arrival to America as an immigrant, Doris and she had a bond. Cupie was originally hired as a head-of-residence and maintained Miss Duke’s affairs. Her entire family was known to have involvement in the caretaking of the estate and its many facets, but Cupie was priceless. For many years, Cupie’s family lived in-residence on the former Duke Mansion before it was destroyed. Her contributions as a professional liaison to Miss Duke are catalogued as part of the Oral Histories Project at Duke University and it appears as though her work was acknowledged by the foundation as well. In honor of her passing, we discovered a beautiful plaque and memorial overlooking Heron Lake in what would be the backyard of Miss Duke’s home.

Duke Farms, Operation Orchid and RRBlog respectfully say thank you, sincerely, for taking a moment to honor and recognize the value of Miss Duke’s hand-selected staff. We feel that the memorial is well-deserved and a step in the right direction to fully represent the Duke way of being. Our condolences are with Cupie’s family. You have more friends and support than you know.

In addition to this profound statement, it appears as though the good will and TLC didn’t stop there. (Author’s note: bikeriding makes the entire estate far more accessible. We heartily recommend- safely- trekking up the Old Foundation hill just for the sake of zooming down the steeper side by the Kiva doors.) Pausing for tea breaks is essential; and we stopped on the south-facing clearing by the foundation that faces Vista Lake. It warmed my heart to be able to see straight across Vista Lake, which was clean of algae (mostly) without the overgrowth permeating the view.

It’s not a perfect situation by far, and nothing excuses the atrocities committed by the DDCF and DFF against the historical integrity of the state of New Jersey and Somerset County, however….

We are thankful that it appears that… in small steps…. the values of family, community, and meaningful, multi-track legacy are creeping back into the protocol fabric of Duke’s Estate.

We are eager to see how everyone is able to identify, develop, and act on new ideas that truly reflect Miss Duke’s methods from home. 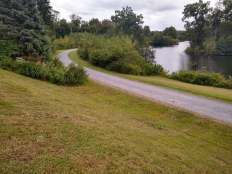 I can see clearly now

Vista Lake looking sexier than ever

Our friend Jake modeling at the reflection spot dedcated to Cupie