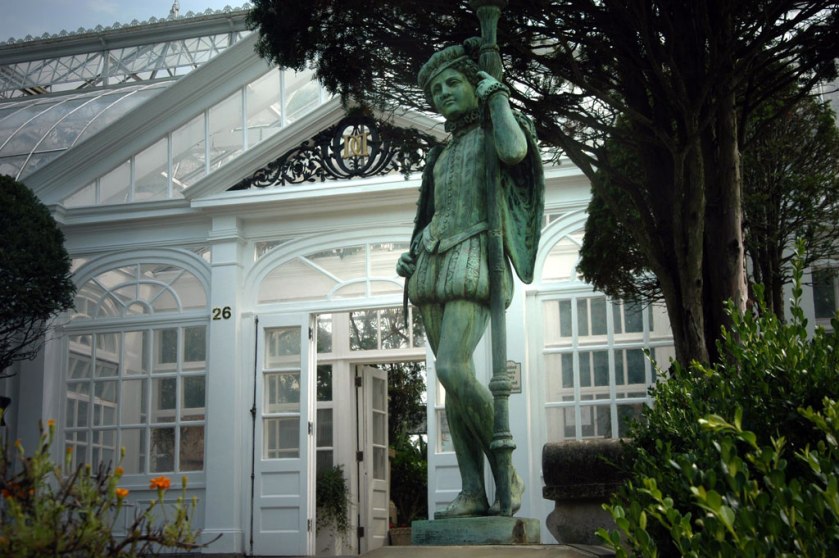 This week marks an excellent award for the DORIS group’s ongoing efforts to bring a historical and cultural homage component back to the beautiful, timeless Duke Farms Estate in Hillsborough NJ.

Nancy Piwowar, a devoted member of DORIS and a historian in her own right, has attempted for several years to nominate the Trumbauer-Abele Greenhouse structure on the property for New Jersey’s 10 Most Endangered Historic Structures. This year, she was successful and attended the announcements at the State House in Trenton on Thursday, May 18th.

Piwowar was also a memoir contributor to the independently-published success, The Duchess of South Somerville. Her contributions to the DORIS group and the subsequently published book have been able to shape the stories of how the Duke family has continued to influence generations of people, even after their unfortunate passings. She has been with the group for years.

Horace Trumbauer (Click here for full bio) was one of the greatest architects of the 19th and 20th century in America. His work, based out of Philadelphia was considered masterful, which resulted in many of his creations being preserved for future generations. He hired a gentleman named Julian Abele (Click here for background) who would later create the campus landscape at Duke University. Abele was one of the first and arguably the most profound African American architect there has ever been. Due to the year that he began working under Trumbauer, evidence suggests that his signatures in design reflect the construction of the Greenhouse complex at Duke Farms.

The Trumbauer-Abele Greenhouse structure was initially constructed in 1909 by James Buchanan ‘Buck’ Duke as a way to produce fruits and vegetables for his family and staff on the property. Luxuries like oranges and watermelons were cultivated year-round. In 1917, the greenhouses experienced their first major additions, which accomodated more plants and more employees. Later on, Buck’s daughter Doris (‘The Richest Girl in the World’) decided to pay respect to her father’s love of nature by recreating the interior of the structure in 1958.

For 6 years, the interior was designed and grown into the iconic, award-winning Garden of Nations, also known as Duke Gardens. This wholly separate foundation was responsible for opening its doors to the publicly-accessible series of internationally-inspired gardens to fascinate its visitors for years until its closure by the Duke Farms Foundation in 2008. The garden complex and foundation located on the property of Duke Farms was also responsible for selling plants to visitors and offering events like easter egg hunts for children on a yearly basis. 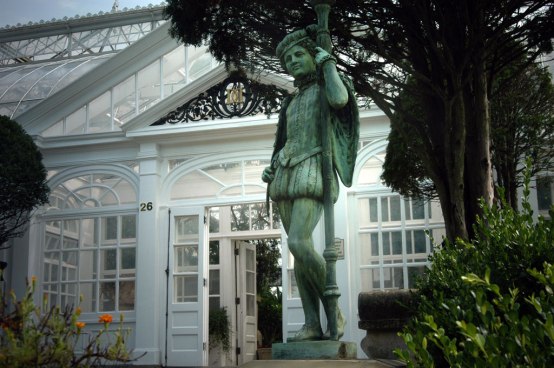 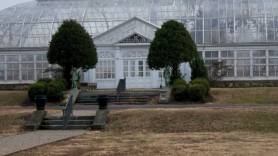 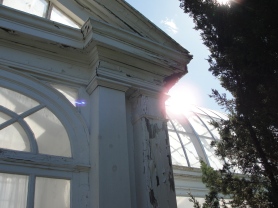 Wood Rot (This Gallery is owned by RetroRevival) 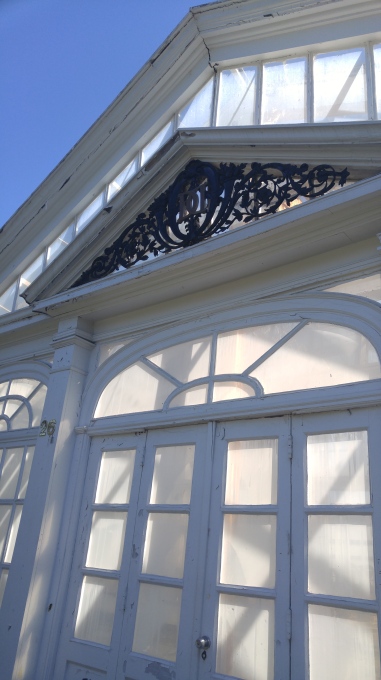 The Garden of Nations, and the Duke Insignia 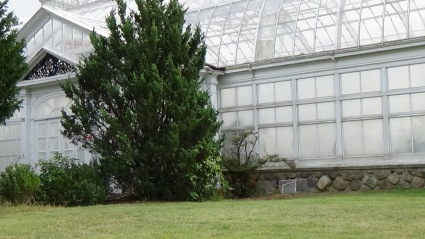 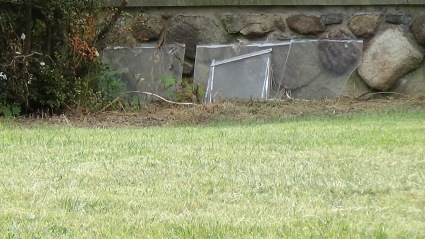 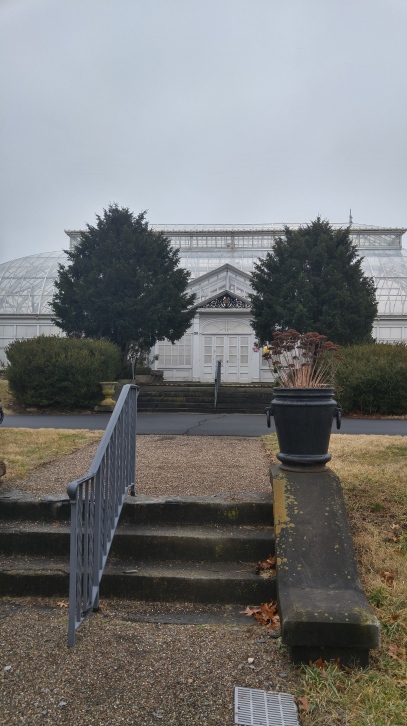 In 2008, the argument for its permanent closure was defined by the executive director, “The era of display gardens is over”, despite its annual yield of over 100,000 visitors. No plants have been sold since in an attempt to create an environmentally-friendly property. In a recent printed article in the Star Ledger (5/17/17), executive director Michael Catania states that restoration and reuse for the complex will begin “in a few years”. In the same article, a representative from Preservation New Jersey (the organization that recognizes the 10 most endangered each year) stated that the selection of the greenhouses for this recognition was, “A no-brainer”. Since 2008, the structure has suffered severe decay: chipped paint, extensive wood rot, and multiple broken panes of plexiglass compliment the missing French garden wing that was identifiable by its encompassing green trellises. (Author’s note: the French Garden was almost entirely destroyed by Hurricane Sandy in 2012 and was not restored.) A few more years may yield another demolished structure on the estate that could cost too much money to restore (sound familiar yet?). This state of disrepair was the very reason that the Dukes’ own home was deemed unpreservable by the property’s overseers. The display gardens once housed in these greenhouses can be considered the most visible depiction of the beauty and value of Duke’s vision for inspiring others through nature’s wonders. Is it really being maintained? Will the proprietors of this space allow enough decay to occur to make the building irreparable?

The Doris Duke insignia still perches atop the front entryway, which has lost some roofing (replaced with rotting plywood, est. 2015), hopeful that someday the complex welcomes guests again. As of now, the only publicized use for the structure is partial, with only a segment of the overall greenhouse complex still active for propagating seeds for neighboring farms leased through Duke Farms. Several decaying or partly-living plants linger behind the glass curtains. Fragments of window panels, which were transitioned to plexi-glass decades ago, lay strewn about the edges of it’s stately façade, with its rampant wood rot complimenting what shadows remain of a once-lush indoor paradise.

The future is still hopeful for this amazing, unique, and signature of Trumbauer and Abele’s. The overall integrity of the structure is uncompromised yet: it can be saved! With a little love and attention to restoration and some impetus for change, this greenhouse would be perfect to teach guests about orchid care, residential greenhouses, and the values of biodiversity (just examples, the imagination is limitless) and more!

Due to the recent history at Duke Farms, it is difficult to speculate whether or not a historic nomination will be sent in for the greenhouses. The strict adherence to a mission statement of environmental stewardship may overpower any protective status the staff could seek for its buildings. Perhaps help, support, or encouragement will help save the historically significant Trumbauer-Abele Greenhouses: featured as a staple of the Duke Farms lifestyle- which has how spanned more than 100 years.

***More on Abele, courtesy of newyorksocialdiary.com: “There is uncertainty and just a little fear on that handsome face. Being black in racist turn-of-the-century America, he very probably felt both, even in Trumbauer’s world of rich and cultured clients. Abele took credit for the design of only one building during his entire career, the Duke Chapel in Durham, NC.
He never made the claim himself, but the Wildenstein Gallery on East 64th Street is generally attributed to him as well. Trumbauer spotted Abele in 1902 when he was fresh out of the University of Pennsylvania’s architectural school. Abele was not only its first black graduate, but also the president of the university’s Architectural Society.
Trumbauer subsequently underwrote three years of study in Paris for Abele. In point of fact, Abele did a great deal of Trumbauer’s heavy lifting. When the Depression hit and business collapsed, Trumbauer descended into alcoholism. After his death in 1938, it was Abele who kept the firm alive.” 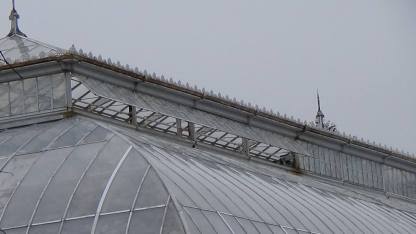 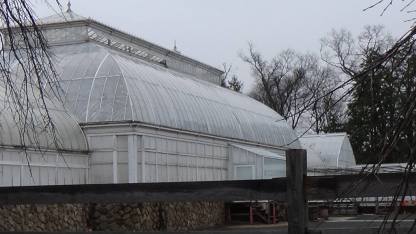